Blessed by Pacha Mama herself

Peru is an exotic and mysterious country where incredible natural resources are concentrated. One of the most talked about “forest attractions” of the Peruvian Amazon is a liana (or a vine), which in the language of the Shipibo Indians is called Oni (derived from the word Onan – knowledge). 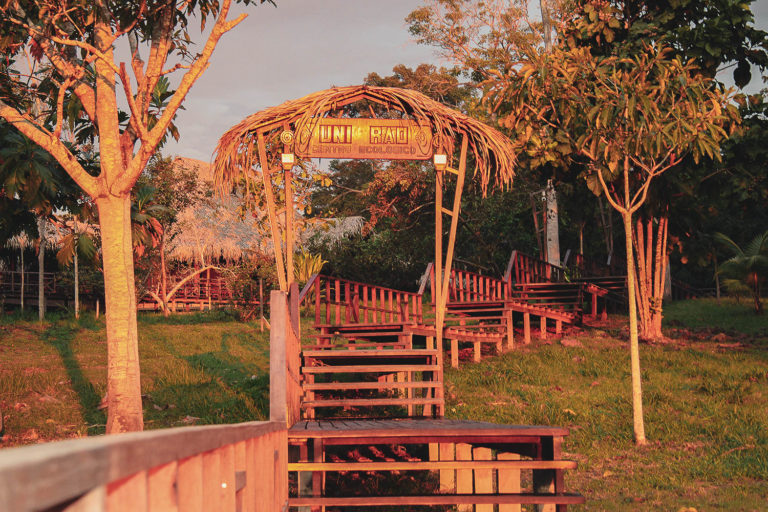 Entrance to the ecolodge UNI RAO

In the language of the Quechua Indians, this vine is also known as Ayahuasca (in Hispanized version), which is usually translated as “spirit vine”. The ecolodge UNI RAO is named after this sacred plant. Right now Ayahuasca is blooming in the Medical Garden of our ecolodge. This is a rare phenomenon. Locals say that those who are lucky enough to contemplate this flowering receive the blessing of Pacha Mama herself (Quechuan spirit of Mother Earth, the progenitor of humanity). 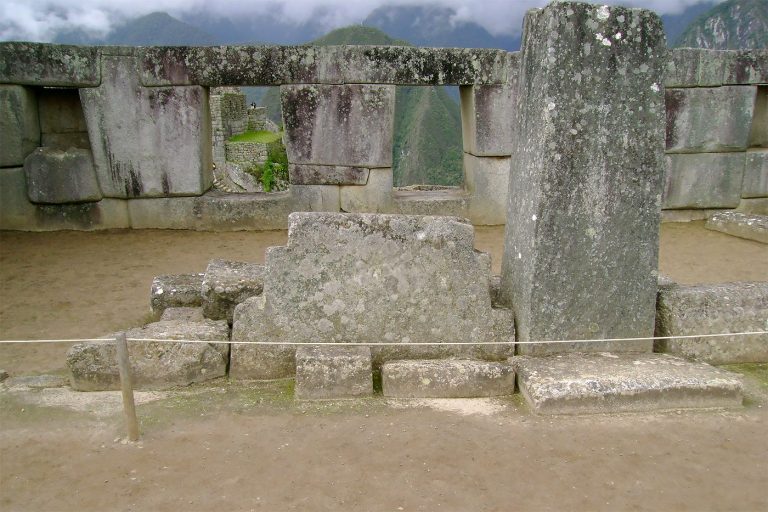 A bit of botany

Ayahuasca (Latin Banisteriopsis caapi) belongs to the Malpighiaceae family and grows in the tropical rain forests of South America: in Brazil, Colombia, Peru, Venezuela, Ecuador and other states of the Amazon basin. There were attempts to breed this vine in other countries with hot climate and suitable air humidity, for example, in Spain. 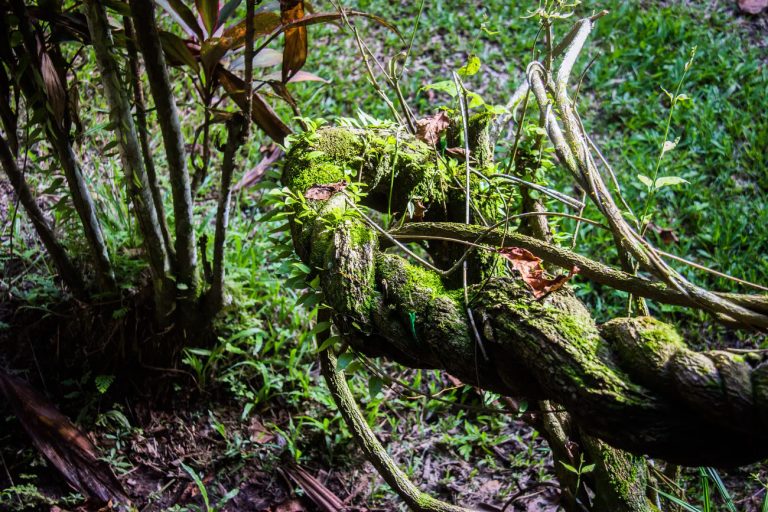 This plant can grow up to gigantic sizes – up to 50 m in length and up to 1 meter in diameter. The leaves are large and oblong, with a rounded-pointed shape. The trunk, usually from several stems grown together and ornately twisted, forms all kinds of bizarre shapes, resembling a giant anaconda. The trunk is covered with smooth brown bark. The indigenous peoples make various crafts from plant slices: pendants, inserts into earrings, key rings, etc. 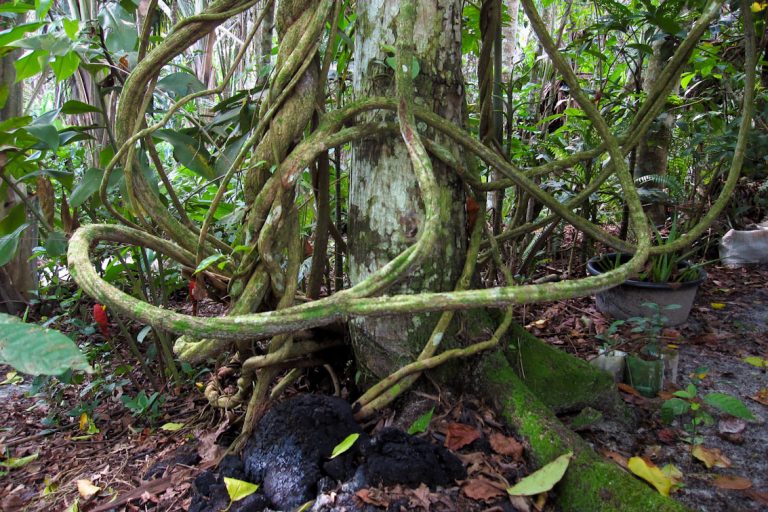 Trunk of Ayahuasca can grow up to 1 m in diameter

The vine blooms rarely, but when this happens, you cannot take your eyes off. Inflorescences can reach a size of 14 cm, have a white or light pink hue, and exude a very weak and delicate sweetish aroma. Each Ayahuasca flower usually has 4-5 petals. 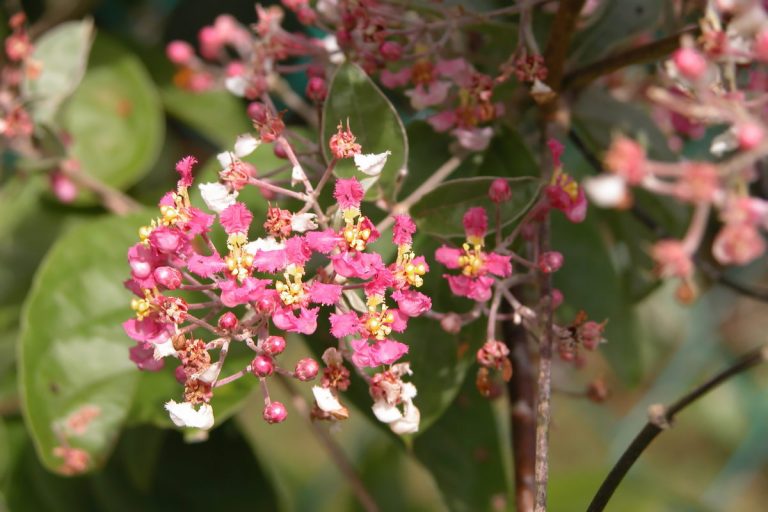 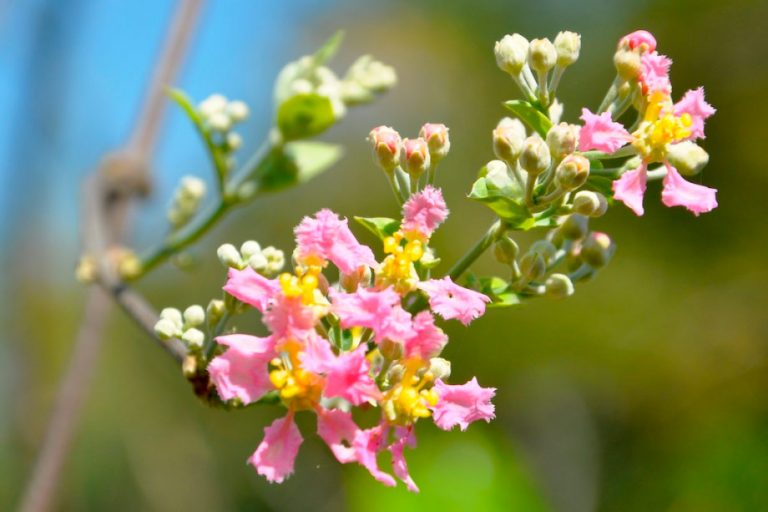 According to scientific studies, Ayahuasca contains active substances from the beta-carboline group, such as harmine, which has antidepressant and antibacterial effects against tubercle bacillus, as well as antitumor effects against certain types of cancer cells. It is an adaptogen, an immunostimulant and an excellent anthelmintic.

The indigenous peoples of the Amazonian selva widely use the Ayahuasca drink as a tool of religious initiation and healing, as well as to stimulate clairvoyance, astral travel, for self-development and meditation. Ayahuasca is the basis for traditional medicine of more than 75 indigenous tribes in the Amazon region, the most famous being the Shipibo-Conibo tribe union. Similar drinks have many different recipes and names: Yage in Colombia, Kaapi in Brazil, etc. The oldest archaeological find with traces of a ritual drink similar to modern Ayahuasca brew is a ceremonial goblet found in Ecuador, believed to be over 2,500 years old. 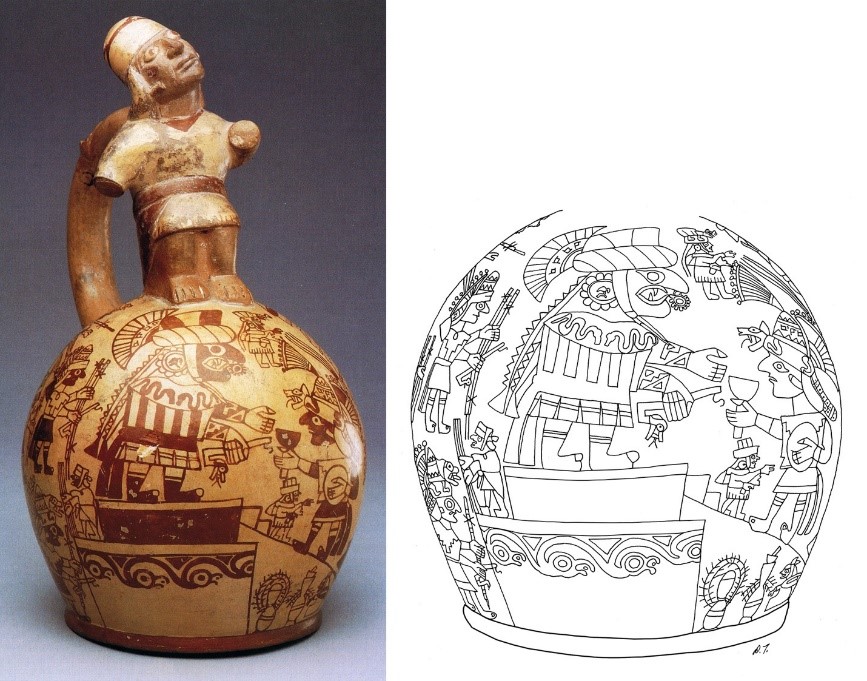 Ceramic vessel of the pre-Columbian Mochica civilization, which existed in the territory of Peru, depicting the use of a ritual drink. 500-650 A.D.

In 2008, the National Institute of Culture of Peru (INC), a government agency within the local Ministry of Education, officially declared the knowledge of Ayahuasca and its traditional uses as a National Cultural Heritage. National Directorate Resolution №836/INC states that Ayahuasca is known to the native Amazonian peoples as the “Wise Plant” or “Teacher Plant” (Spanish Planta Maestra), which teaches initiates about the basics of the world and its components. 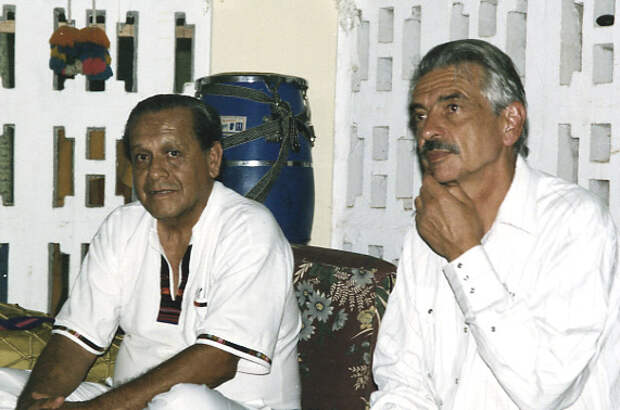 A number of scientists are studying the properties of Ayahuasca. For example, the first rector of the National University of San Martin in Peru and Ph.D. at the Santa Fe University of Natural Medicine in the USA – Jorge Gonzalez Ramirez (left) and his colleague, friend and apprentice Maximilian Erdeli, a doctor of alternative medicine who studies the culture of the Indians of the South and North America more than 20 years (right). Source – magazine “Alternative Medicine” (Spain). 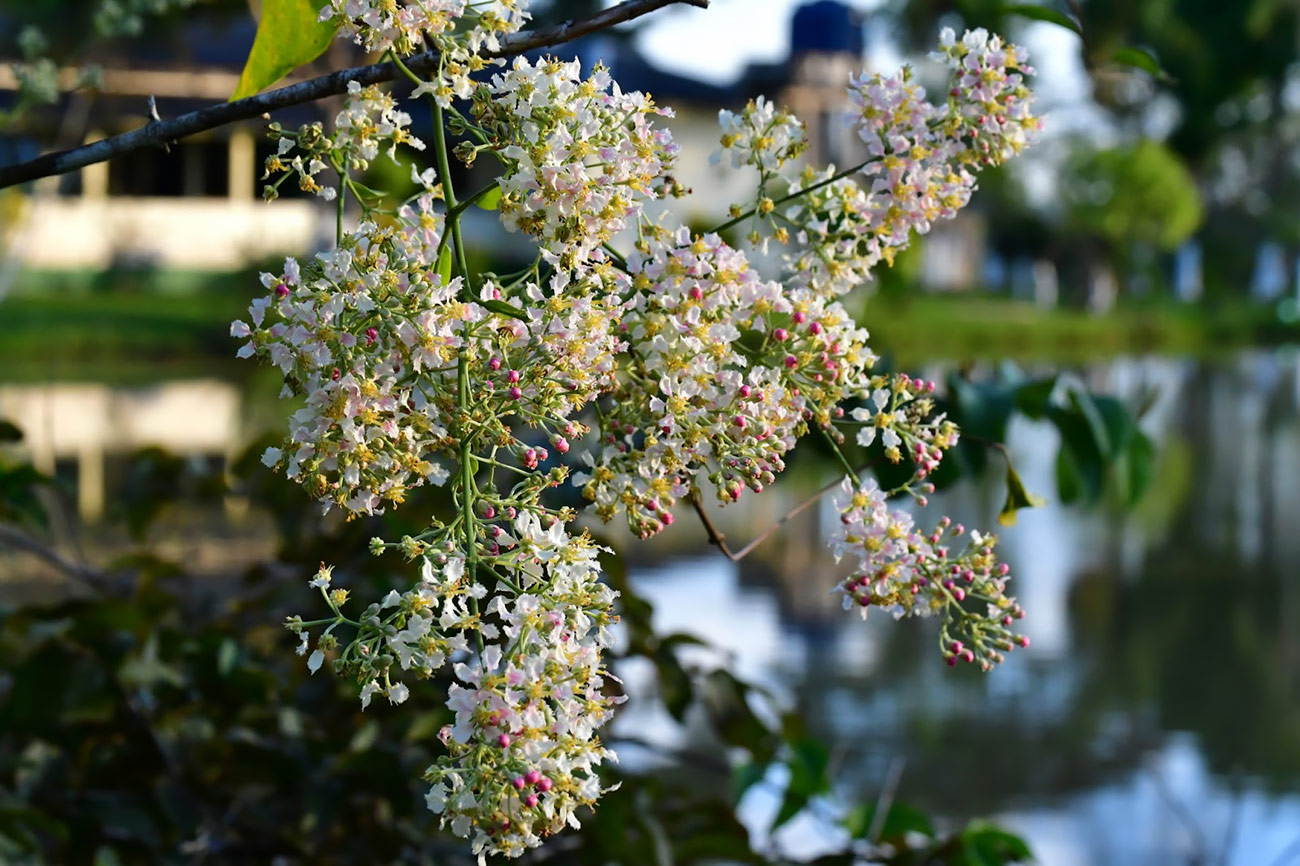 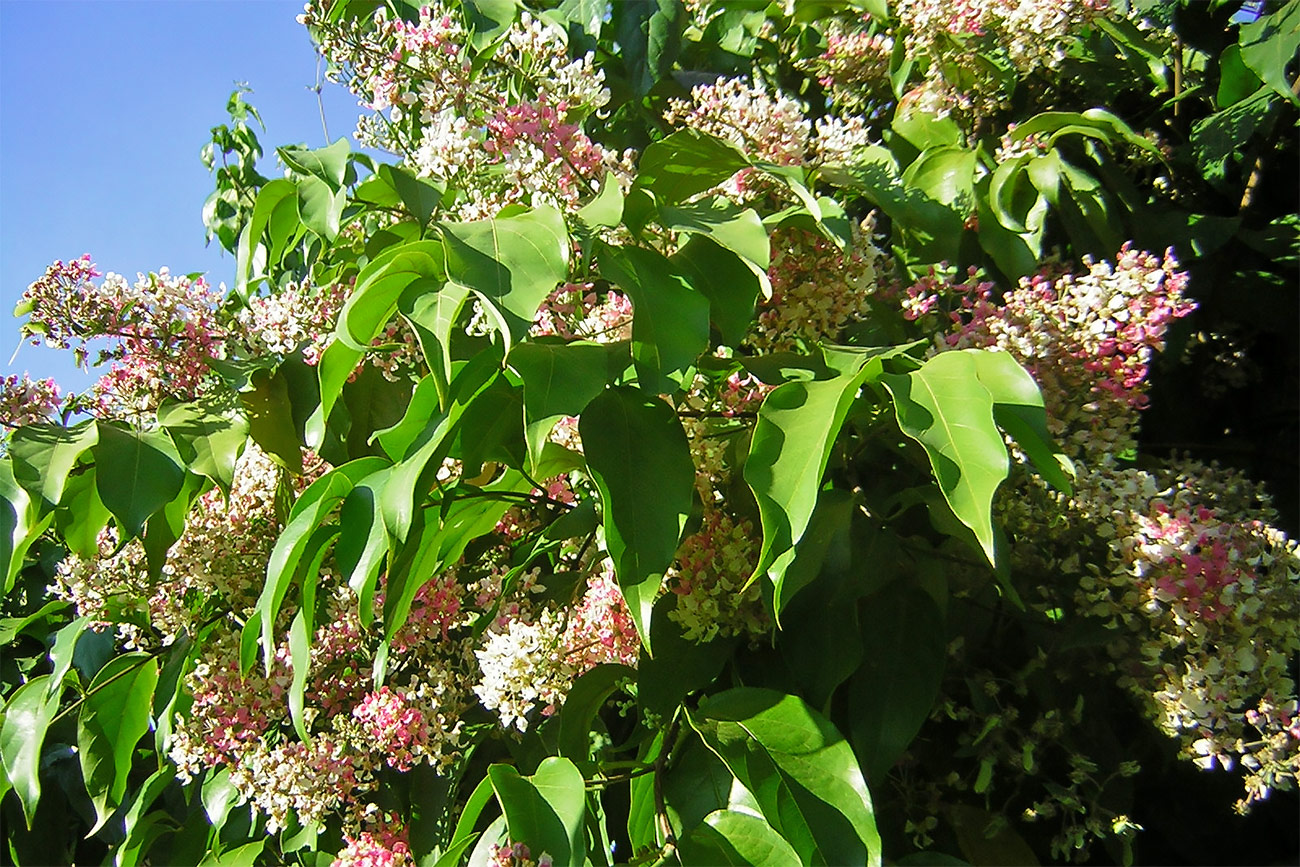 Local healers (curanderos) distinguish many types of Ayahuasca, each with its special properties. For example, yellow (or heavenly) Ayahuasca is used to prepare a healing and “educational” drink, red is used only for treatment, and black is suitable for removing various effects of black magic (brucheria) by the most experienced healers (maestros). There are also snake, lightning and other types of Ayahuasca.

Ayahuasca blooms last only a few weeks. So if you want to catch it, hurry up to book a room in the UNI RAO ecolodge! Our staff will be happy to show you the most picturesque areas of the Amazon jungle with Ayahuasca flowering. 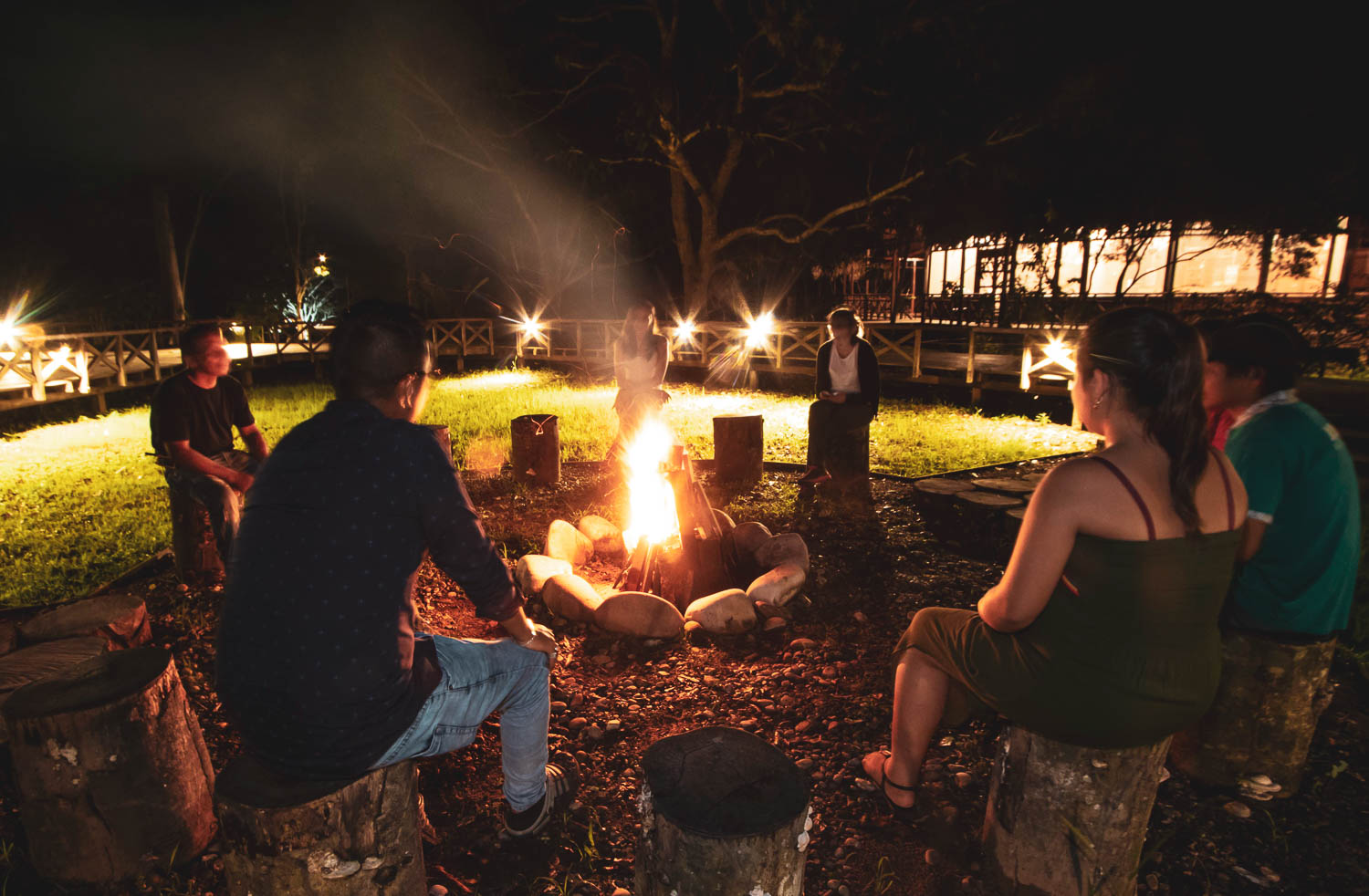 Welcome to the ecolodge UNI RAO!