Every year the Peruvians celebrate plenty of religious and cult fests, both Catholic and inherited from the ancient pre-Columbian civilizations. 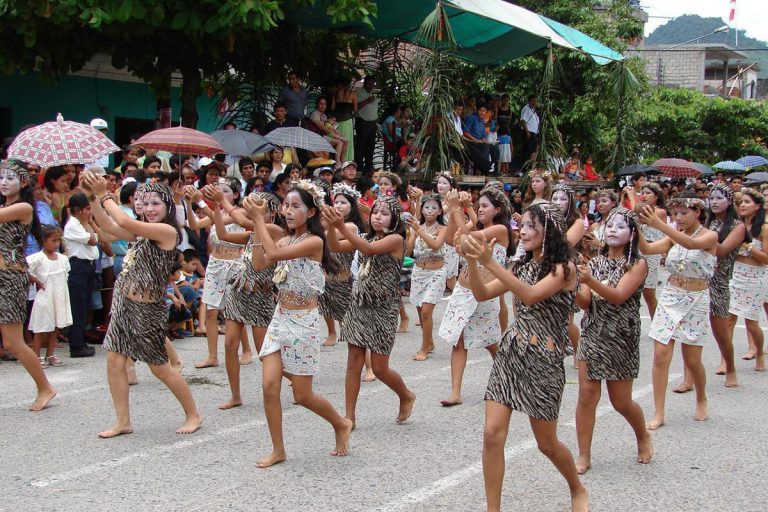 One of the most famous and important festivities in Peru is Inti Raymi (Festival of the Sun in Quechua) – analogue of Midsummer. This is the feast of the winter solstice, which falls on 21st of June in the Southern Hemisphere.

The ceremony of meeting and worshiping the Sun is still held in the ancient city of Cusco on the ruins of the Sacsayhuaman fortress, where during the era of the Inca empire the temple complex was located and the local garrison was stationed. 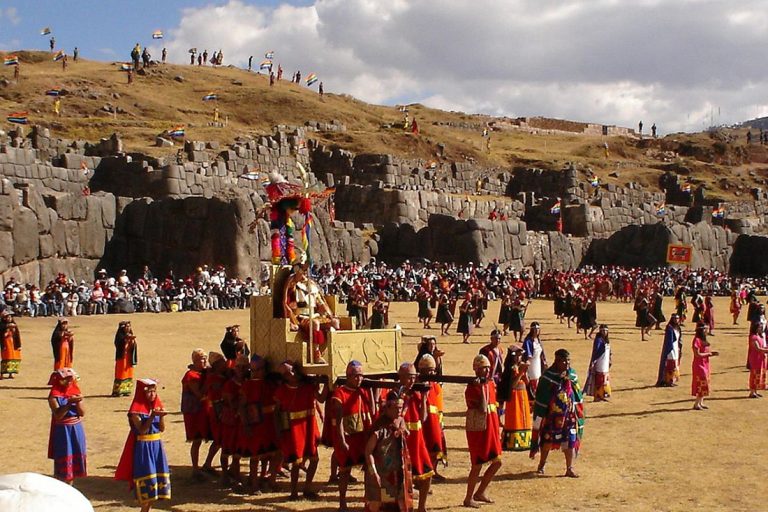 Inti Raymi almost coincides with the traditional Catholic fest in honor of St. John the Baptist (here he is called San Juan or Juan el Bautista). This holiday is celebrated on a large scale in various parts of the country, including the Amazon Jungle, especially since John the Baptist is considered the patron saint of the Amazonia.

The symbolism of two events – the day of the solstice and the Feast Day of Saint John the Baptist are intricately intertwined in the consciousness and rituals of the Peruvians. So, the holiday is a mixture of Christian rites and pagan carnival with dances and festivities.

Already at dawn, a festive mood is felt in all cities and towns of the country. Torches are burning, numerous palms are decorated with pennants and multicolored flags, special decorations with biblical themes are being displayed. Saint John’s Eve begins. 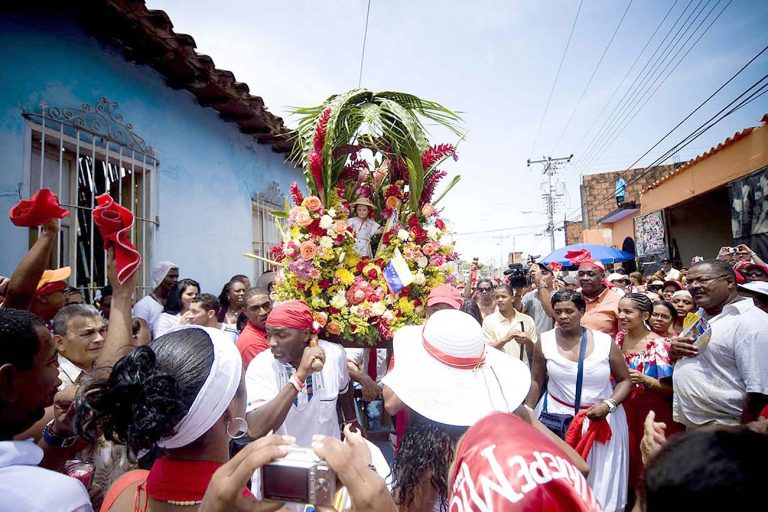 After the festive mass in churches and the procession with the glorification of John the Baptist, folk festivities start, where the holiday head is represented as San Juan.

In the evening, a huge festive altar unfolds under specially built awnings with a palm leaf roof. Small folk orchestras play all night long, whose musical instruments always include a violin, an harp and f sharango (a plucked string instrument like a guitar). To the sounds of local colorful music, men and women in folklore costumes perform a traditional dance, inherited from their distant ancestors. The carnival continues til dawn… 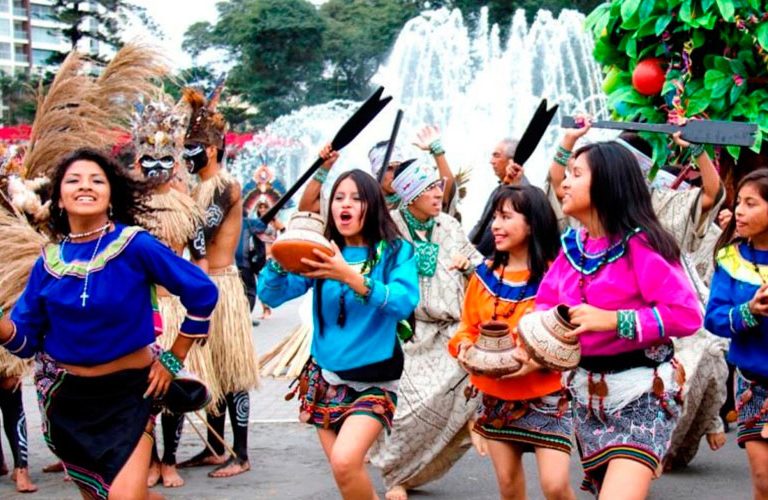 An integral part of this celebration is a traditional dish with a strange name for foreigners “Juan’s head” or, as they say here, “Juane”. This local Peruvian dish symbolizes the head of St. John the Baptist, who, according to the Gospels of Matthew and Mark, was executed at the instigation of Queen Herodias. Her daughter Salome asked for the head of the Saint for her dance. After the Beheading of John the Baptist, it was presented on a platter first to Salome, and then to Herodias. 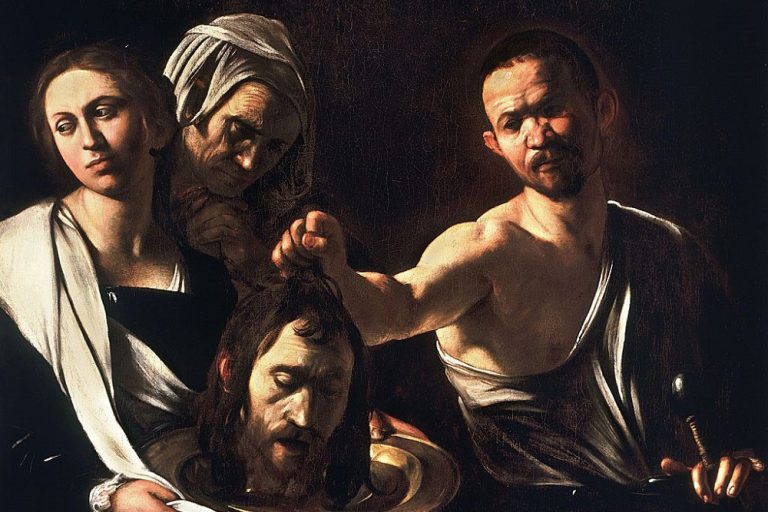 Juane is a rice ball with a piece of chicken, olives and eggs inside, tightly wrapped in a wide sheet of bihao (lat. Calathea lutea). And its shape really resembles someone’s head.

According to the National Library of Peru, the Juane dish first appeared in the city of Moyobamba in the Peruvian Amazon. It was originally called “Rumu Juane” and was made from yucca (local cassava). The dish was wrapped in bihao leaves for better safety during transportation, when they went deep into the jungle for a long time. Steamed and tightly wrapped in a leaf, the food remained almost sterile and, if the leaves were not disrupted, could be stored for several days.

Later, rice and a piece of chicken were used to prepare this popular dish. As historians say, this food dates back to the pre-Columbian era. But when the Spanish conquistadors arrived in the lands of the Incas, the clergy accompanying the conquerors, specially named this dish after San Juan, using the similarity of its appearance to the shape of a human head, in order to popularize among the Indians the history of St. John the Baptist. 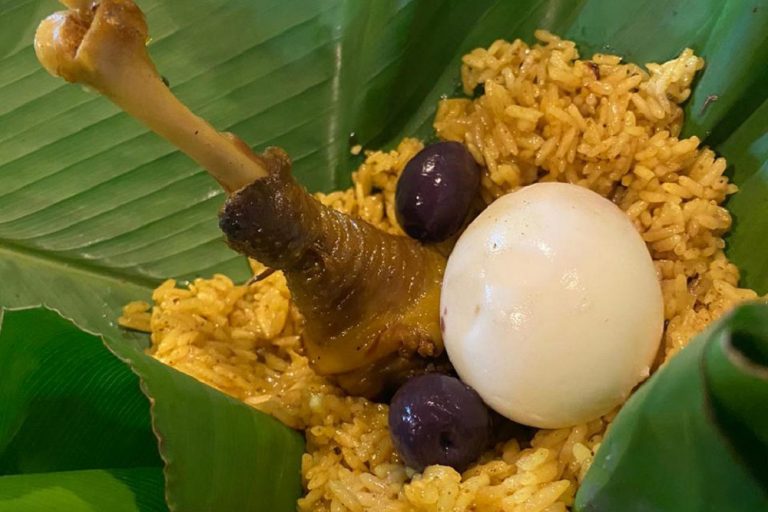 If you will visit families or hotels in the jungle on the San Juan holiday, you should taste the “head of Juan”. In the Amazon Jungle, this tradition is so rooted that even outside the holiday, walking through the city, you can meet a woman sitting at her house at a large table full of Juanes… How can you resist a spicy ball of rice, which hides a good piece of country chicken, a hard-boiled egg and a few olives… mmmmm… and all this is wrapped in a bihao leaf, which gives the dish the characteristic aroma and exotic taste. And the smells of the traditional onion-lemon sauce with pieces of cocoons and hot pepper Charapita, and Juane itself make the celebration truly unforgettable.

Make sure that your first Juane is the best! “It’s like a first kiss, like a first love. This is unforgettable, and you will always look for someone like him”, assure the experts in the preparation of this traditional delicacy.

The chef of our ecolodge UNI RAO shares his secret recipe of this unusual dish. 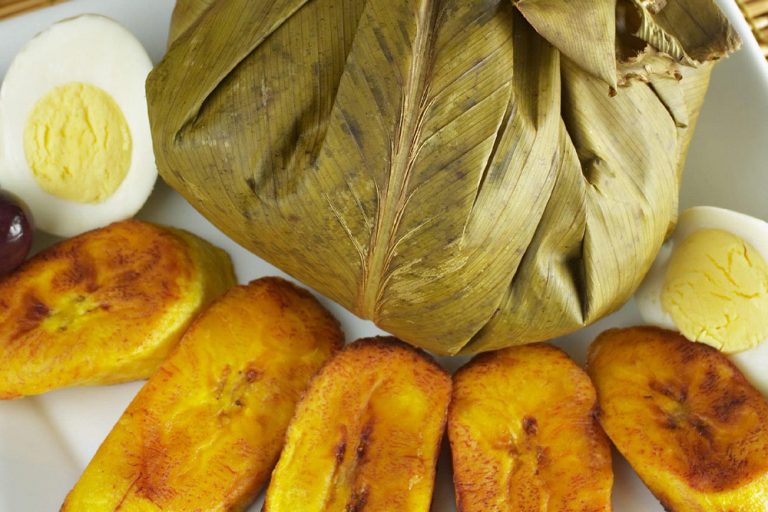