From Paradise to the «UNI RAO»

We have another superb news for you! In January a friendly guest of our ecolodge presented us a pair of Indian blue peacocks as a gift. Our «garden of Eden» acquired another zest. And recently, our peacocks began to breed, which happens quite rarely in captivity. But since we live one life with nature, there is nothing to be surprised by.

We were preparing for a long time for the meeting with the «paradise`s birds»: we chose a place and built a house-aviary, consulted with ornithologists on the maintenance, care and feeding of birds. Soon, we received a call from Lima that our peacocks had arrived and were to undergo a two-week quarantine. 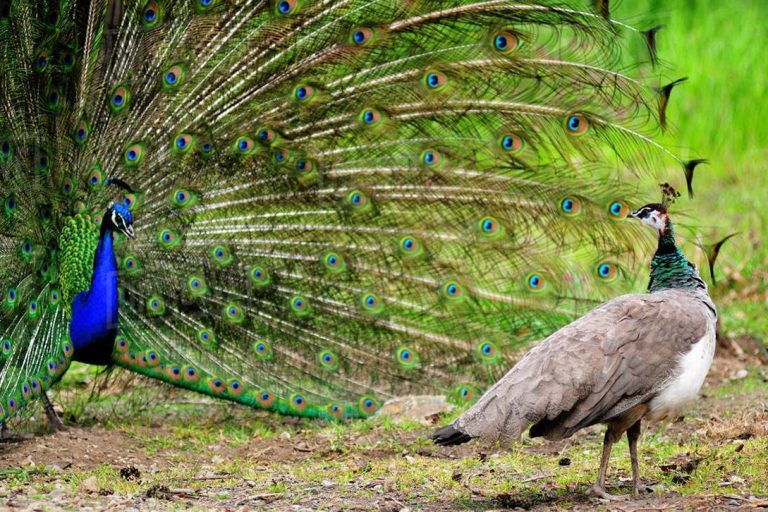 Peahen (female peacock) has not so gorgeous plumage, but still looks beautiful.

And then came the day «X». A pair of blue peacocks came to us from India. True, the male was without a fairy tail. But soon everything was clear: peacocks have a molting period when they take off their plumage. The new tail was not long in coming, and we disassembled the feathers from the old one for souvenirs. A peahen (female peacock) has not so gorgeous plumage, but still looks beautiful. 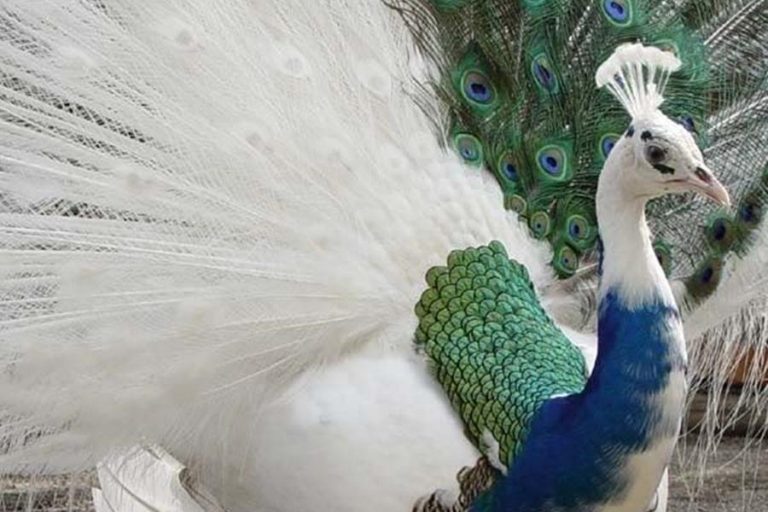 The Harlequin gene is the cause of the unusual color of the garden of Eden`s bird.

Only 8 months have passed, and our new settlers are already expected to have an offspring – a clutch of 4 eggs. We do not yet know what sex the chicks will be, since the incubation period will take 30 days. Perhaps the chicks will have an unusual white color, since, according to the chief ornithologist of Peru, our male peacock possesses a rare gene for the Harlequin mutation. In any case, the new tenants of our ecolodge will delight all guests of «UNI RAO». By the way, peacocks can live up to 50 years, and in captivity – up to 20 years.

A bit of zoology and interesting facts

Thanks to its lush ocellated tail, the «paradise`s bird» is known as the most beautiful among gamebirds. It may seem that it is difficult to drag such a tail, but in fact, males deftly run with it and even fly. Although peacocks rarely hover in the sky, preferring a terrestrial lifestyle. 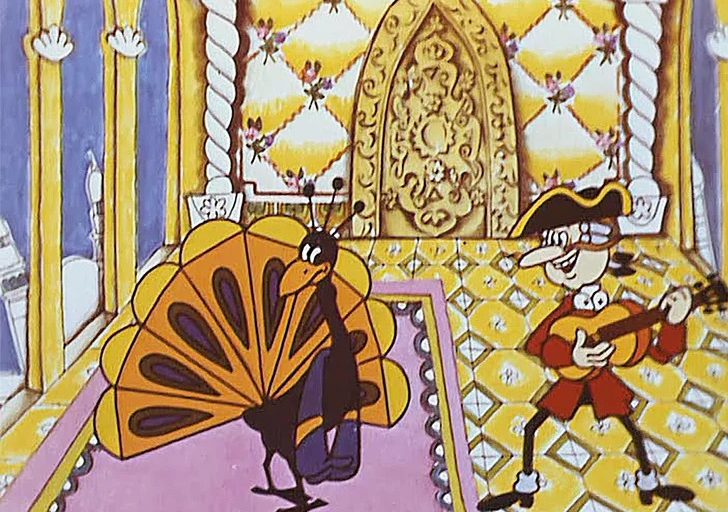 A still from the series «Peacock» (1974) from the Soviet animated series about the adventures of Munchausen.

The peacock tail has many functions. First, it serves males to attract females. Competition is high: males can have a harem of five peahens, but they cannot sing songs – the peacocks have a very nasty voice! This contradiction between appearance and voice even became the plot of one of the series of the Soviet cartoon about the adventures of Baron von Munchausen. From this cartoon came the popular expression «pavlin-mavlin» (pavlin is a peacock in Russian), which became the name of a chain of Uzbek cuisine restaurants in Moscow.

Secondly, in case of danger, the peacock spreads its gorgeous tail – the enemy is frightened and retreats. Third, the tail is a means of communication. Sometimes you can see how vibrations pass through the feathers, which are accompanied by a sound similar to the rustle of foliage. Feather movement also emits infrasound below 20 Hz, inaccessible to the human ear. Scientists believe that it helps birds to warn their relatives about danger. 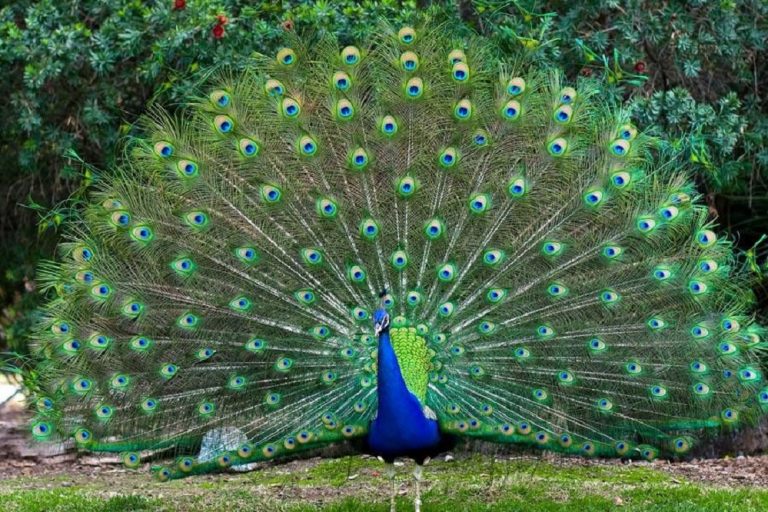 The peacock tail has many functions.

Peacocks are very cautious, even quiet sounds make them run and hide. It is believed that the peacock senses the approach of enemies (for example, snakes) and natural disasters (for example, thunderstorms). Therefore, since ancient times, these birds have served people as a kind of «sensors», signaling the approach of danger.

Peacocks were originally bred by wealthy Indians, Chinese, and then Europeans. Due to the beautiful plumage, these birds gave a special status to their owners, because in the countries of the East they are considered a symbol of splendor, prosperity, immortality and pride. It is not for nothing that peacock feathers were used to make the fans of Indian maharajas. In addition, in India, peacocks, like mongooses, have been used for centuries to catch cobras (they hunt snakes).

In Hinduism, the peacock is the vahana (mount) of the goddess Sarasvati and the god Kartikeya. In Tibetan Buddhism, the peacock feather is revered for its similarity with the symbol Tigle, which in combination with the Tibetan letter A forms the emblem of Dzogchen (meaning the primordial state of Rigpa). Tibetan monks in their treatises on medicine pointed out that peacock meat can help with eye diseases, increase immunity and general body tone. In China, the peacock symbolized dignity and beauty. His feather was given to a person when he received a high rank and signified the favor of the emperor. The Chinese believe that peacock meat is not only tasty, but also healthy. 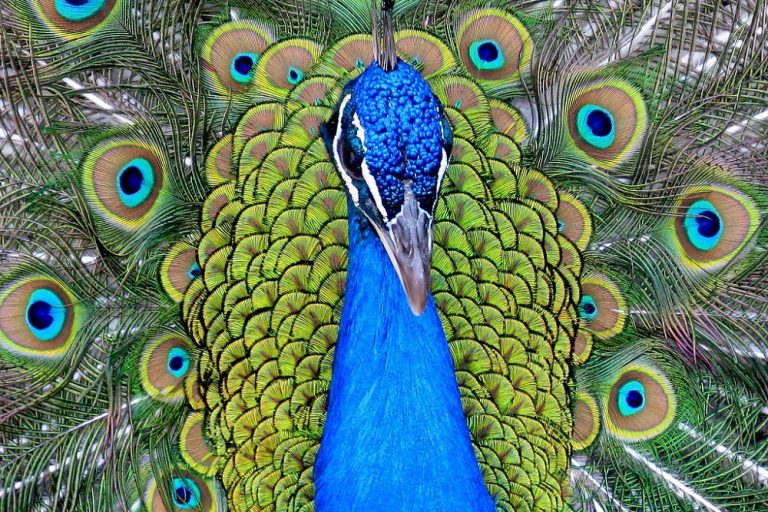 In the East, peacocks are considered a symbol of splendor, wealth, immortality and pride.

In ancient Rome, the «bird from garden of Eden» was the emblem of the empresses and their daughters. In Europe, the peacock feather as a symbol of nobility adorned the helmets of knights. In Russia, these birds have become a symbol of arrogance. They are dedicated to such Russian sayings as: «The master walks like a peacock, proudly, important», «She hides like a peahen with an egg», «What is a peahen, such is her glory», «Like a peahen». Hence the description of the overseas princess in Pushkin’s «The Tale of Tsar Saltan»: And she herself is majestic, steps like a pava (peahen) – in English translation: Full of majesty and grace. 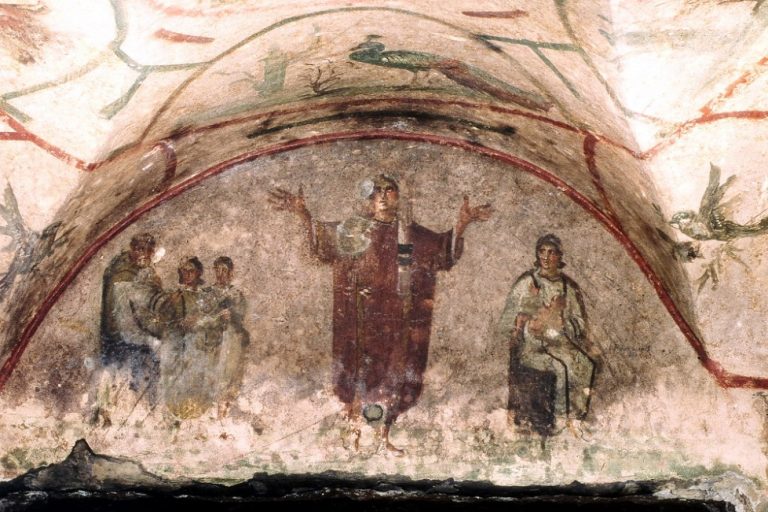 The fresco depicting a peacock and the praying Our Lady (Oranta) in the Priscilla catacombs in Rome (II-IV centuries AD) is one of the oldest images of this bird as a Christian symbol.

In early Christian art, the image of a peacock is often found as a symbol of immortality (this meaning is borrowed from the ancient tradition, in which it was believed that the meat of this bird does not spoil). In Christianity, it is believed that the peacock refused to eat the forbidden fruit in Paradise and was rewarded with the incorruptibility of the flesh. The fact that the peacock renews its feathers every year, Christians saw a similarity with the resurrection of Christ. And the «eyes» on the tail were associated with the All-Seeing Eye of the Lord. 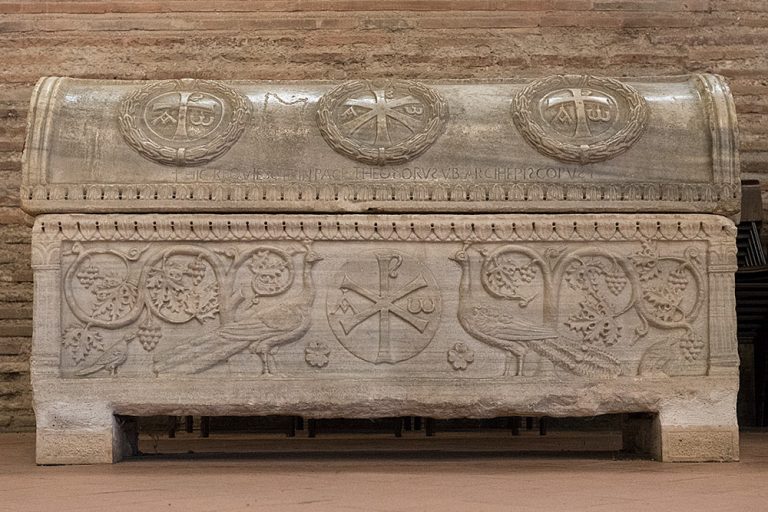 Image of two peacocks on the sarcophagus of Bishop Theodore in the church of Sant Apollinare in Classe in Ravenna (VI century AD).

Therefore, the peacock motif was often used on sarcophagi and in catacomb paintings. So Christians expressed their hope for the resurrection of the deceased. Often the «paradise`s bird» was depicted drinking water from a solemn bowl-kanfar – this is a symbol of a Christian who drinks the water of eternal life. 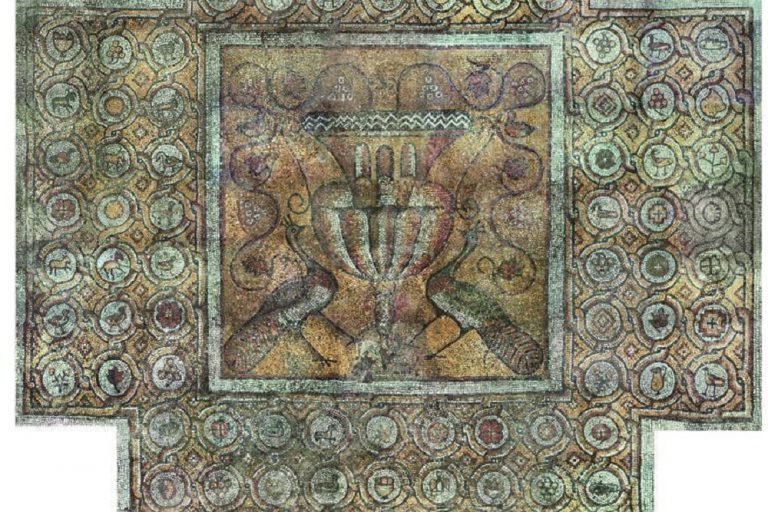 Floor mosaic depicting two peacocks in a Byzantine temple in Chersonesus in the Crimea (the Monastery of the Virgin of Blachernae). Although the images on the mosaic are borrowed from late antiquity, they are permeated with Christian symbolism – the Communion, immortality, Paradise and new life.

Images of peacocks were not uncommon in the sacred art of early Byzantium, for example, in Ravenna (modern Italy) and in the Chersonesus in the Crimea, where the foundations of a IV century temple were found. Its floor was covered with marble mosaics with late antique and early Byzantine images, in the center of which were placed two peacocks on either side of the kanfar. 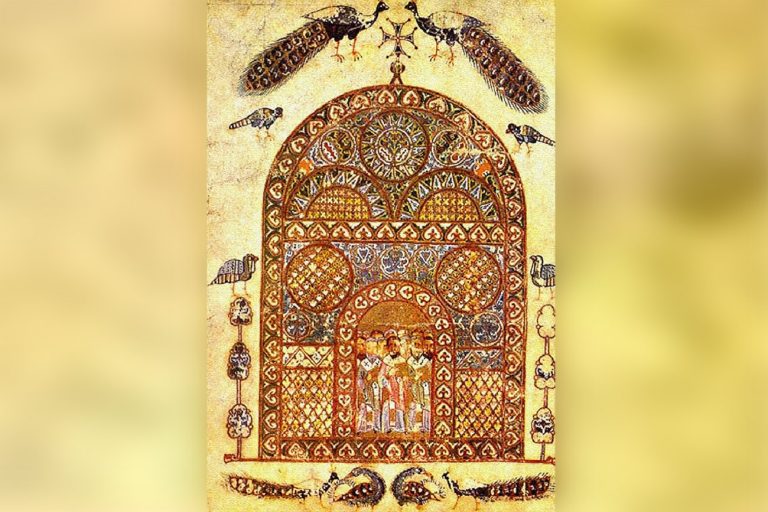 Miniature with peacocks from Svyatoslav’s Izbornik (1073).

From Byzantine culture, this symbolism migrated to the Old Russian tradition. For example, a miniature depicting two «paradise`s birds» from the manuscript Svyatoslav’s Izbornik is known, made by Byzantine artists in the XI century for the Kiev princes. From the Byzantines, the image of a pair of peacocks also was introduced to Islam, where it is a symbol of the unity of opposites (sun and moon). 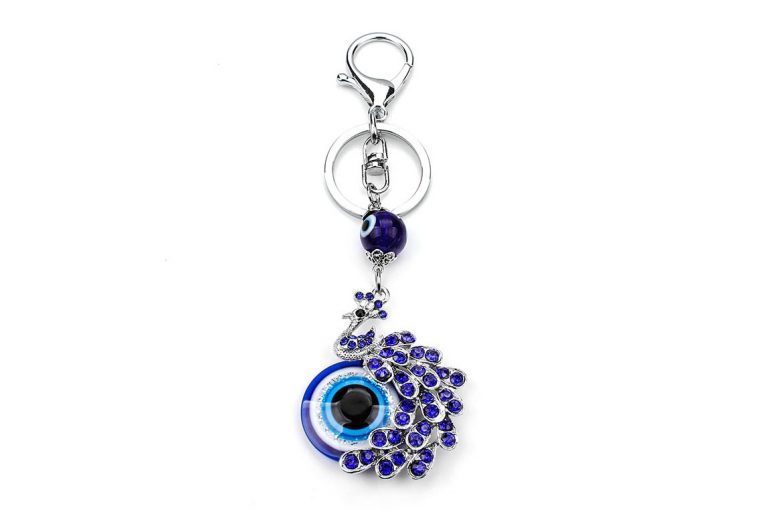 «Peacock symbolism» is of current interest. Many tourists who have been on vacation in Turkey bring an amulet «peacock’s eye» as a souvenir. It is used as a talisman against the evil eye in Turkey, Bulgaria, Greece, Cyprus, Syria, Lebanon, Israel, Pakistan, India, Iraq, Iran, Algeria, Uzbekistan, Armenia, Azerbaijan, Georgia… This amulet is borrowed from the culture of the Byzantine Empire, which it got from ancient Egypt and ancient India. 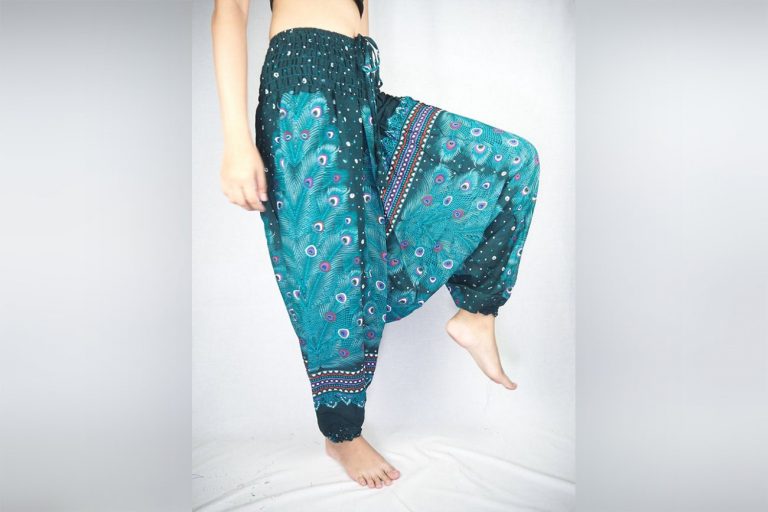 Trousers-aladdins with the image of a peacock’s tail.

In Islam, the peacock’s eye is associated with the Eye of the Heart. It is worn over clothing in the form of a pendant or bracelet, placed in a conspicuous place in an apartment or office, hung in a car, in baby strollers or over cribs. In India, the peacock is still a symbol of happiness, prosperity and well-being, Therefore, his images are often placed on clothes. So, the fashion for loose trousers-aladdins with the image of a peacock tail with «eyes» has spread from India all over the world. 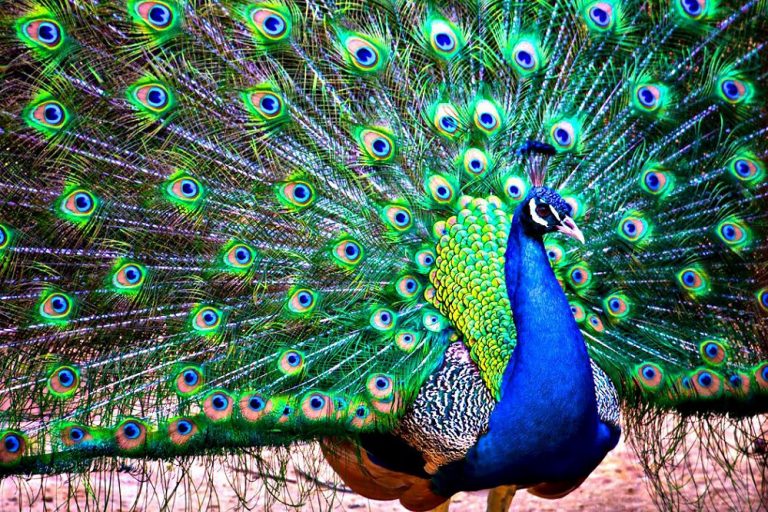 Guardian of our «paradise».

We invite you to watch the life of our new settlers not only by our news, but also personally, having come to the ecolodge «UNI RAO». The unsurpassed beauty of the «paradise`s birds» will not leave anyone indifferent. We hope that these beauties will bring good luck and prosperity not only to our ecolodge, but also to our guests. At least, these birds will be warning the staff and guests about tropical thunderstorms and possible visitors from the Amazonian jungle. 🙂