The ecolodge «UNI RAO» opened an exhibition of Visionary Art

The current year has been challenging and stressful all over the world. This year the visionary artist from the Shipibo-Conibo tribe, Robert Rengifo, has gone forever. He had no artistic education, but his paintings, filled with mystical experiences, convey THE experience, which is rooted in Indian legends and is an integral part of the local traditional shamanism. By a lucky coincidence, 9 unique works of the master were included in the collection of our ecolodge.

What is Visionary Art?

The so-called «Visionary Art» is the style of creating works of art based on the images seen by the author in an «altered state of consciousness». In fact, this is what artists see in a state of meditation, trance, or even «insight given from above».

This style has gained wide popularity around the world in the middle of the 20th century, in the era of hippies and the subsequent development of the New Age (a combination of mystical and esoteric movements), as well as the philosophy of the American-Czech psychologist and psychiatrist Stanislav Grof and one of the leaders of the American counterculture Timothy Leary. 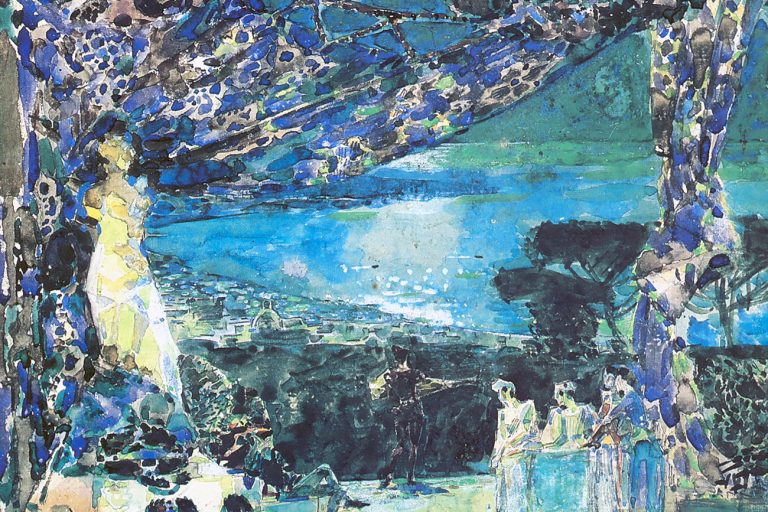 Many artists claim that this style dates back to the archaic cults of primitive tribes. And some see the origins of modern Visionary Art in the works of the great Flemings – Hieronymus Bosch and Pieter Brueghel the Younger. For example, in Russia frescoes and icons by Andrei Rublev and Theophanes the Greek are sometimes referred to this artistic style.

Indeed, visionary painting is often found in sacred art. Many religious artists and icon painters pray before getting to work. Prayer can be considered a type of trance. And if the artist draws inspiration from it, then he can be called a visionary, and his art – accordingly, visionary. It is not for nothing that a number of Western contemporary visionary artists consider Russian painters Nicholas Roerich and Mikhail Vrubel to be their predecessors. 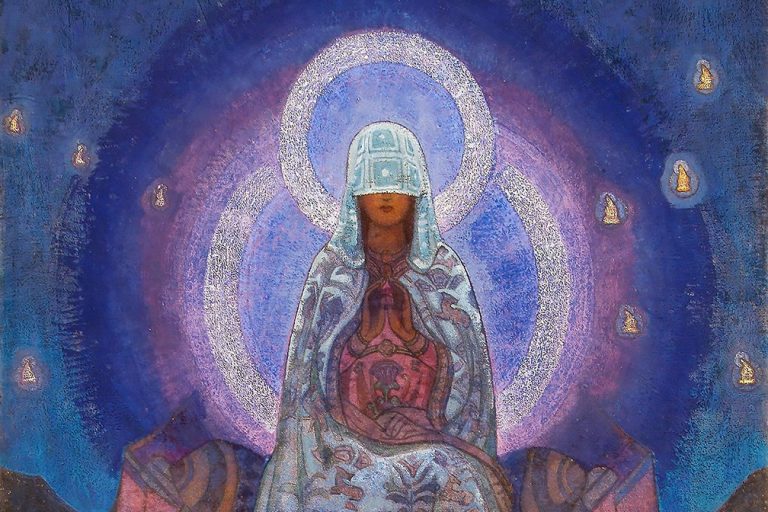 Nicholas Roerich, «Mother of the World». 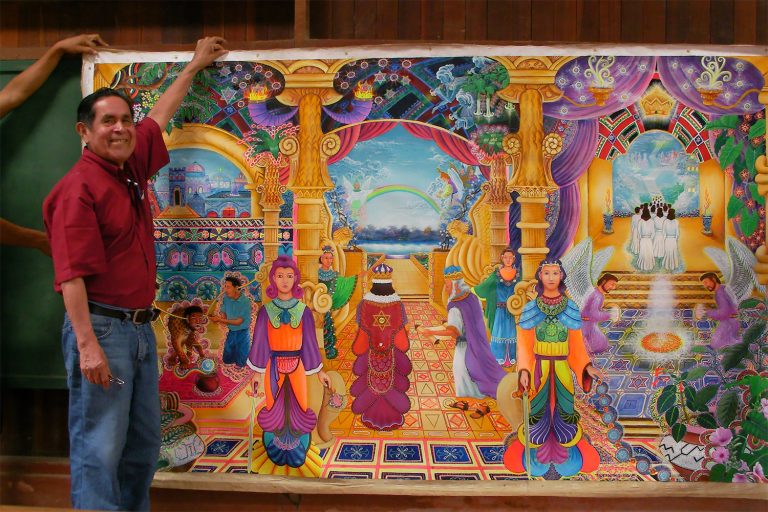 Pablo Amaringo in front of one of his works.

Many artists from the Peruvian selva are shamans or their apprentices. Their works contain personal stories that convey through visions THE experience, knowledge and folklore of the inhabitants of the Amazon. The most famous Peruvian visionary artist is Pablo Cesar Amaringo Shuña (1943-2009). He was a shaman, and when he stopped shamanic practice with Ayahuasca ceremonies, he concluded: «You cannot play with Ayahuasca. It can kill, but not because it is toxic in itself. The human body may not be able to withstand the vibrations of the spirit world». 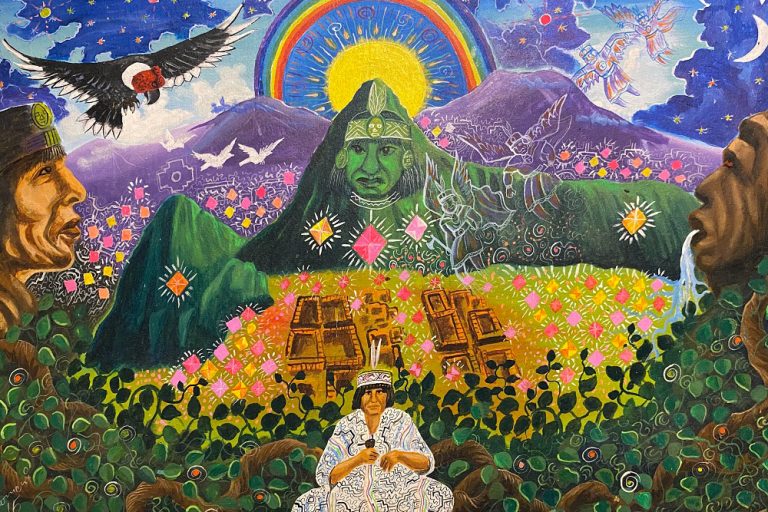 One of the works of Robert Rengifo, which is included in our collection.

Pablo Amaringo realized that his mission in life was to convey the wisdom of nature and the inhuman world without words, depicting his visions with paints on canvas. He devoted his whole life to this. His visionary brush, like the wings of a bird, carried him across the ocean. In 1992, Pablo was nominated for the prestigious Global 500 Peace Award within the United Nations Environment Program. His love for nature, for the human spirit and for cosmic vibrations still shows us the way.

But let’s return to 9 jewels in ecolodge «UNI RAO» – unique paintings by Robert Rengifo, which are included in our collection. The peculiarity of this talented self-taught artist is that his work was based on the legends of the Shipibo-Konibo Indians, which were passed from mouth to mouth for thousands of years. The artist dreamed about creating a cycle of paintings by the legends of his people, and then publishing a book, illustrating it with these works, in order to transfer sacred knowledge to future generations. But, unfortunately, he did not have time to do this. 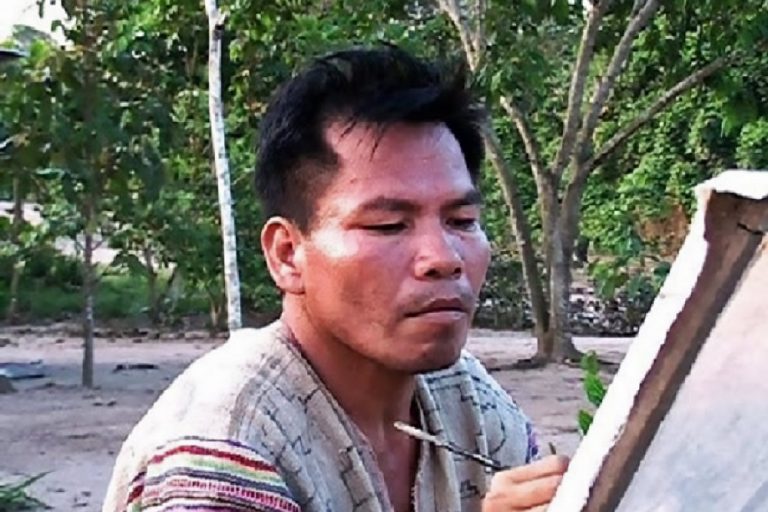 All guests of our ecolodge «UNI RAO» now have the opportunity to admire the unusual works made not by a professional artist, but by an Indian from the very heart of the Peruvian selva (Roberto was from the Nazareth commune in the Ucayali region). These works are filled not only with the history of an entire nation, but also with amazing energy. Being nearby, you feel the involvement in the depicted plots and involuntarily immerse yourself in them. 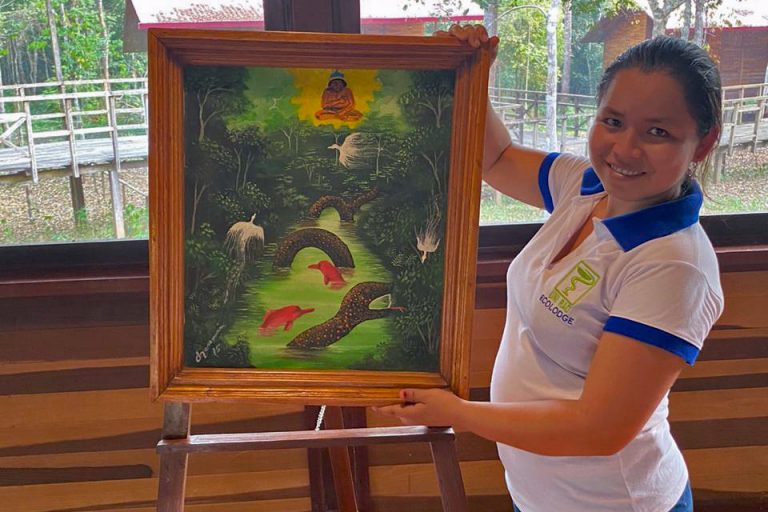 The ecolodge «UNI RAO»`s staff preparing an exhibition in our maloka.

We have placed Rengifo’s works in our maloka, which, by the way, is one of the largest (and we are sure the most beautiful) in Peru. This is a hut-like structure built in accordance with local traditions and intended for the sacred Ayahuasca ceremonies. Usually, all members of the community gathered in such malokas to pass on tribal myths, spiritual experience, everyday advice and various wisdom to each other, as well as conduct healing ceremonies and teach the sacred knowledge of plant medicine. In our opinion, this is the most suitable place for the works of the Indian visionary artist. 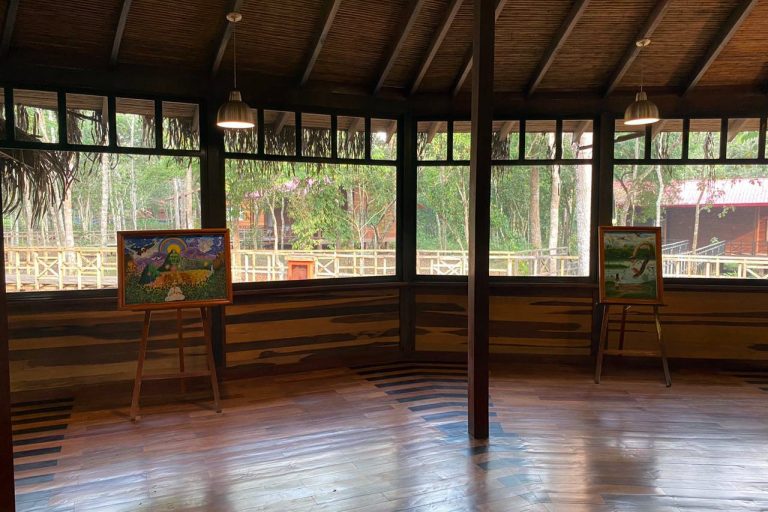 An exhibition in the ecolodge «UNI RAO»`s maloka.