Dear friends, great news for those who have already missed the hot Peruvian sun and our Ecolode UNI RAO! The rainy season is coming to an end and there are more and more sunny days. The water is gradually receding from the selva, and for the specialists of “Plant Medicine” it is time to replenish the stocks of the mystical drink “Ayahuasca”…

Who makes and uses Ayahuasca?

For centuries, the indigenous peoples of the Amazon have widely used Ayahuasca as an instrument of religious initiation and healing. It is also used to stimulate the faculties of clairvoyance, astral travel, self-development, and meditation. Ayahuasca is the basis for many traditional medicines for 80 indigenous tribes of the Amazon region, the most famous of which is the Shipibo-Conibo tribe union. Similar drinks are widespread in neighboring regions, where they have many different recipes and names: Yage in Colombia, Caapi in Brazil, etc. 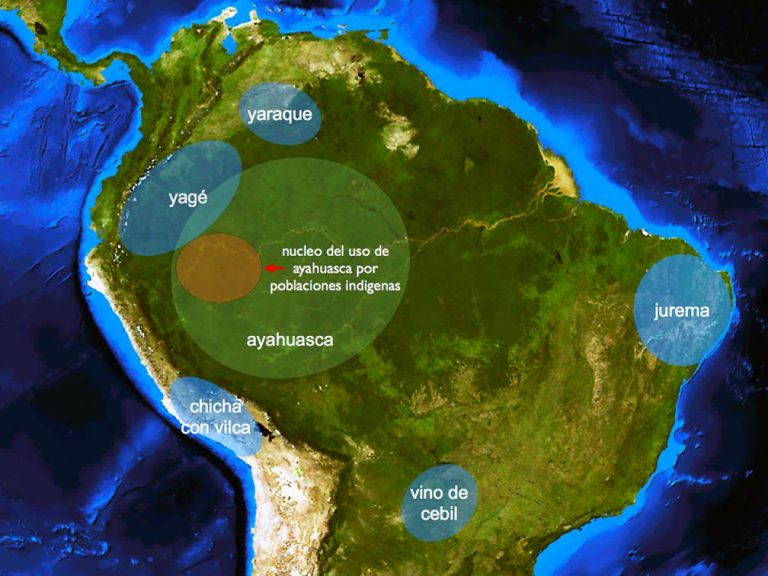 Distribution map of Ayahuasca-type drinks in South America. The heartland of Ayahuasca`s use itself by the tribes of the Amazon is also indicated.

The main region of Ayahuasca` use is the upper Amazon and the western part of the Guiana Shield. The drink is most actively used by residents of the Amazon regions at the junction of the borders of Colombia, Peru, Ecuador and Brazil, including not only Indians, but also mestizos living in the Peruvian cities of Iquitos and Pucallpa. Outside this area, Ayahuasca is used by the natives of northern Ecuador and western Colombia, as well as eastern Bolivia. Around 130 different tribes live here, many of which have their own recipes, ceremony features and their own names for the drink. (Ayahuasca is the Quechua name for a decoction).

Archaeological excavations and written sources speak of the centuries-old use of ritual drinks by the aborigines of South America from Chile to Cuba. Ayahuasca based on Banisteriopsis caapi vine is the most common today, but not the most ancient magic decoction. Its “prototypes” existed at least 3,000-5,000 years ago. Nowadays, there are up to 100 types of this drink using up to 40 different plants. 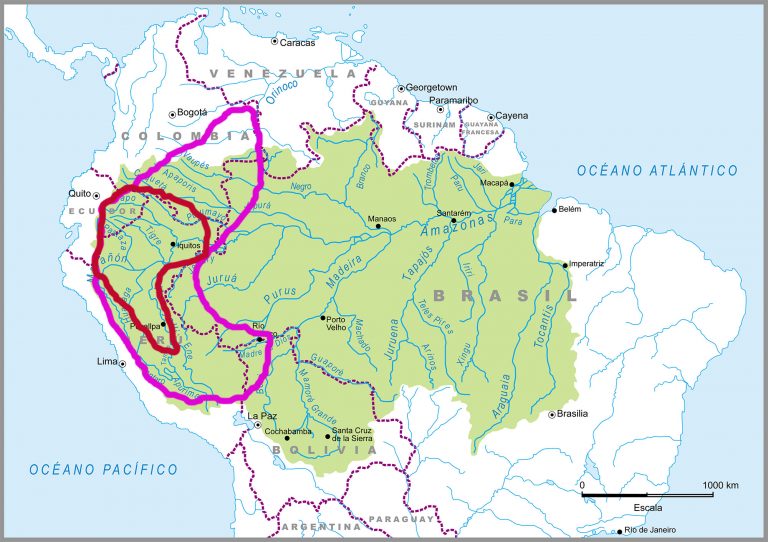 Map of modern distribution of Ayahuasca (the main territory of its presence is highlighted with red and purple outlines).

But archaeological evidence of the use of such drinks in ancient times is relatively rare. The oldest archaeological find with traces of a ritual drink similar to a modern Ayahuasca brew is a ceremonial goblet found in Ecuador and is believed to be over 2,500 years old. Traces of the harmine alkaloid contained in Banisteriopsis caapi were found in the hair of two mummies from 500-1000 AD. in the Asapa Valley in the Atacama Desert in modern Chile. This is a strange find, as Banisteriopsis caapi grows in tropical climates, but not in the desert.

Also of interest is a bag with devices for inhaling specific mixtures (circa 1000 AD), found in the Chilenco Cave on the Lipes plateau in southwestern Bolivia. It contained residues of substances such as the alkoloid bufotenine, cocaine, dimethyltryptamine, nicotine and harmine. The latter, the aborigines of South America could receive not only from Banisteriopsis caapi – like tryptamine, it is also found in trees of the genus Prosopis.

The earliest descriptions of Ayahuasca among European explorers of South America were left by Jose Chantre and Herrera, who summarized the data collected by the Spanish Jesuits in 1637-1767 during missionary activities among the Indians who lived in the Marañon River valley. In the 18th and 19th centuries, a number of works on Ayahuasca were published in Spanish and English. In particular, quite detailed information was left by the Austrian Jesuit Franz Weigl, who lived in Ecuador in 1755-67.

A drink that makes it possible to get in touch with the spirits and the energy world, which we, as a rule, are not able to perceive in the ordinary state of consciousness, is prepared from a mixture of decoctions of two plants. This is actually the Ayahuasca vine and the leaves of the Chacruna bush. The process of making a “magic potion” is very laborious: it requires about 3-4 days of continuous work and concentration.

It is still a mystery how exactly the Amazonian shamans came up with the idea to combine the two main components of the drink. Indeed, individually, both plants (both Ayahuasca and Chacruna) are more or less inert. Moreover, there are about 80,000 deciduous plant species in the Amazon rainforest, of which more than 10,000 are vines. And it is almost impossible to find among them those suitable for creating a powerful “energy drink” simply by exhaustive search, even according to the theory of probability. However, Amazonian curanderos (healers), acting like archaic pharmacologists, somehow figured out how to choose from a variety of plants one particular type of vine and one particular kind of leaves to prepare a psychoactive decoction.

A bit of botany and chemistry

Liana Ayahuasca (Lat/ Banisteriopsis caapi) belongs to the Malpighiaceae family, grows in the tropical rain forests of South America in Brazil, Colombia, Peru, Venezuela, Ecuador in the Amazon. This plant can reach gigantic sizes – up to 50 m in length and up to 1 m in diameter. The leaves are large and oblong, with a rounded-pointed shape. The trunk, usually grown together from several stems and ornately twisted, forms bizarre shapes, resembling a giant anaconda. Covered with smooth brown bark. Liana blooms very rarely. Inflorescences can reach a size of 14 cm, have 4-5 petals of a white or light pink hue, exude a faint sweetish aroma. 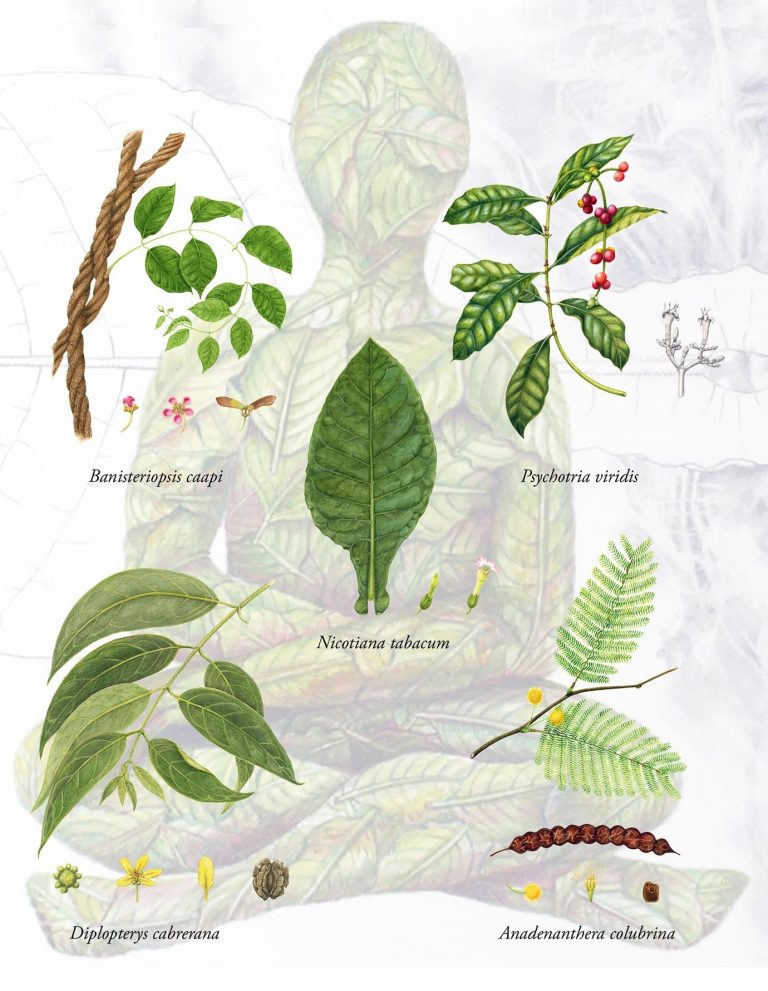 Plants, which are commonly used in Ayahuasca ceremonies.

According to scientific research, Ayahuasca vine contains active substances from the beta-carboline group, such as: harmine, harmaline and tetrohydroharmine. The total content of substances of this group in the vine is 0.11-0.83%, of which 40-96% is harmine. Harmine alkaloids are potent inhibitors of the enzyme monoamine oxidase (i-MAO), which is involved in the metabolism of dimethyltryptamine (DMT), a psychoactive alkaloid found in Chacruna leaves. Harmine has an antidepressant and antibacterial effect against tubercle bacillus, as well as an antitumor effect against some types of cancer cells. It is an adaptogen, immunostimulant and excellent anthelmintic.

Curanderos-healers distinguish between many types of Ayahuasca, each of which has special properties. For example, yellow (or heavenly) Ayahuasca is used to prepare a healing and “educational” drink, red is used only for treatment, and black is suitable for removing various effects of black magic (brucheria) by the most experienced healers (Maestros). There are also snake, lightning and other types of Ayahuasca.

Chacruna (Lat. Psychotria viridis) is a plant of the genus Psychotria of the Rubiaceae family. It has many local names: the name “chacruna” comes from the Quechuan chaqruy – “to mix”. It is a close relative of the Ecuadorian plant Psychotria carthagenensis, known as Yage or samiruca (or amiruca). In some parts of Ecuador, the term “chacruna” is more often used to refer to chalipongs (Lat. Diplopterys cabrerana). 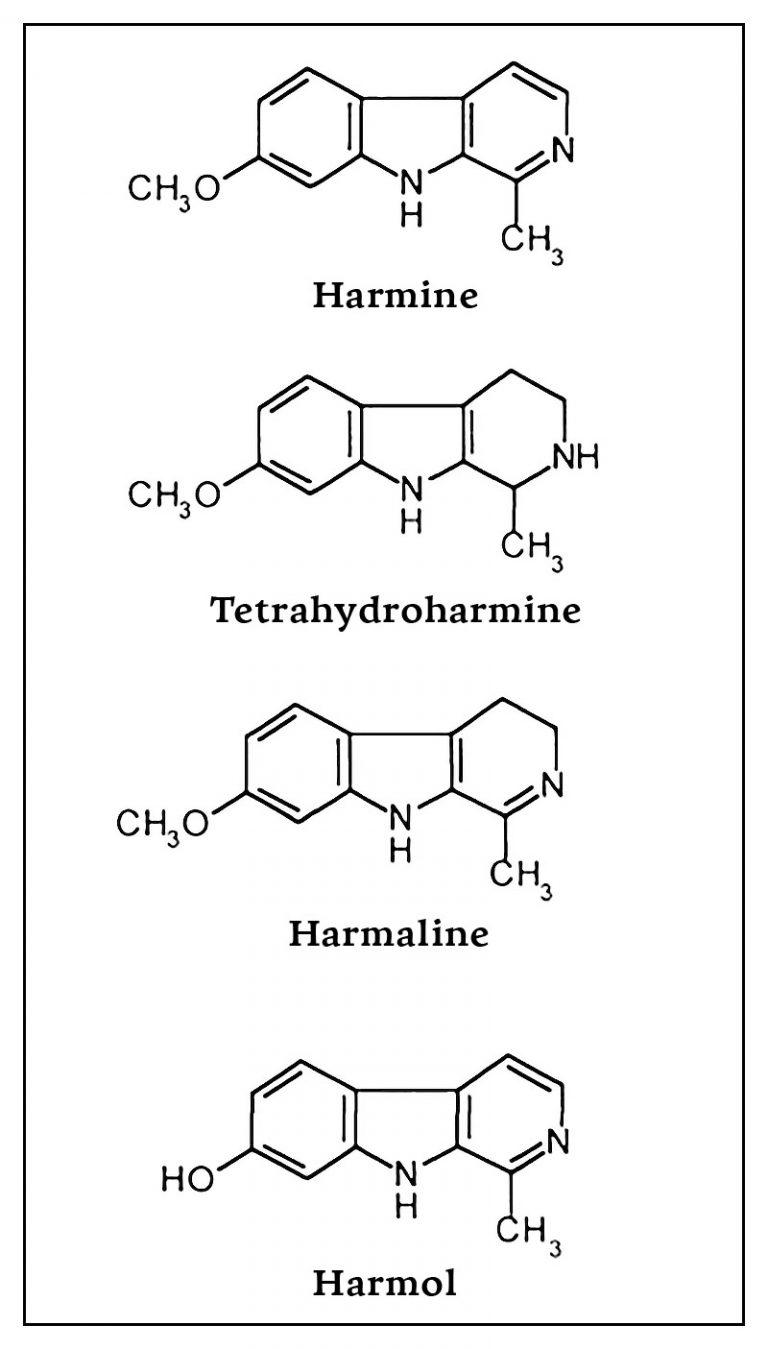 Chacruna is a perennial shrub that grows up to 5 m in height and 2 m in width. Leaves are large, elliptical, usually 5-15×2-6 cm in size, arranged in pairs along the entire trunk. They are suspended on petioles 1–10 mm long; smooth or with microscopic hairs on the underside, with 5–10 pairs of secondary veins, and on the reverse side, as a rule, with foveoli (small sacs in the places where the leaf vessels branch from the central “vein”), which is a distinctive feature of chakruna from other plants… Produces fruits in the form of red berries with large seeds inside.

Psychotria vidris contains 0.1–0.66% alkaloids, of which 99% are psychoactive alkaloid dimethyltryptamine and tryptamine. When it enters the human body, DMT is not an active substance, as it is immediately metabolized in the liver by the enzyme monoamine oxidase (MAO). However, in combination with the substance i-MAO contained in the Banisteriopsis caapi vine, it becomes chemically identical to the tryptamines found in the brain and easily penetrates the blood-brain barrier. Absorbed into the bloodstream, this mixture reaches the brain and causes powerful visions, as well as allows access to other worlds and hidden labyrinths of consciousness.

At UNI RAO Ecolode, guests can admire the snow-white brugmansia, Ayahuasca vine, and also learn to distinguish between the leaves of Chacruna and other “important” shrubs in the jungle. The most curious can take a direct part in the preparation of the mystical drink “Ayahuasca”. Also in the near future, the Museum of Ayahuasca will open, which will be located on the territory of our friends – Ecolode “Cordillera Escalera” in the city of Tarapoto (San Martin province, Peru).

We are waiting for you at UNI RAO!

In Peru and a number of other countries in South America, Ayahuasca is recognized as a healing agent: it promotes the emergence of new neurons and is used to prevent depression, cancer and other diseases. Peruvian shamans who heal people with it are officially considered traditional medicine healers. In 2008, the Peruvian government recognized Ayahuasca as a national treasure. However, in Russia, the dimethyltryptamine contained in it is equated to narcotic substances (with corresponding consequences).

So, in the spring of 2020, the Moscow Regional Court sentenced the healer of Peruvian origin Daniel Diaz-Strukov to seven years in a strict regime colony and a fine of 300 thousand rubles on charges of attempted drug sale. A criminal case was opened against Curandero after he received a package in 2017 from an acquaintance with the Peruvian Dragon’s Blood broth, which contains dimethyltryptamine.

Therefore, we strongly recommend that you refrain from manufacturing, transporting and other manipulations with Ayahuasca on the territory of the Russian Federation: in Russia, all this is unambiguously regarded as drug trafficking. A similar situation persists in many countries of the world, although it is gradually changing. For example, in recent years, the use of the decoction has been decriminalized in a number of US states.